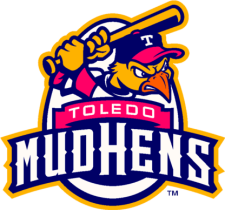 The Toledo Mud Hens are a Minor League Baseball team of the International League and the Triple-A affiliate of the Detroit Tigers. They are located in Toledo, Ohio, and play their home games at Fifth Third Field. A Mud Hens team has played in Toledo for most seasons since 1896, including a 50-year history as a member of the now defunct American Association. The current franchise was established in 1965. They joined Triple-A East in 2021, but this was renamed the International League in 2022.

Mid-season in 1952, team owner Danny Menendez moved the Mud Hens to Charleston, West Virginia, where they competed as the Charleston Senators through 1960. Toledo fielded a replacement franchise in the American Association from 1953 to 1955, the Toledo Sox, which was the former Milwaukee Brewers minor-league team. That franchise subsequently moved to Wichita, Kansas, for the 1956 season, where it competed as the Wichita Braves through 1958.

In 1965, the Richmond Virginians franchise of the International League moved to Toledo and became the current incarnation of the Mud Hens. They were based in Maumee, Ohio, at the converted Fort Miami Fairgrounds. The local ownership group led by Ned Skeldon signed with the New York Yankees to be its top farm team.

The Minnesota Twins took over as the team's major league affiliate in 1978 and brought in Gene Cook as general manager, who was good at promoting the team, particularly as a family event. Cook also got Jamie Farr to incorporate the Mud Hens in Farr's M*A*S*H character's background. The Twins affiliation lasted through the 1986 season. The Mud Hens resumed their affiliation with the Tigers in 1987, and have remained in the Detroit organization since then.

In conjunction with Major League Baseball's restructuring of Minor League Baseball in 2021, the Mud Hens were organized into the Triple-A East. Toledo won the Midwestern Division title by ending the season in first place with a 69–51 record. No playoffs were held to determine a league champion; instead, the team with the best regular-season record was the declared the winner. However, 10 games that had been postponed from the start of the season were reinserted into the schedule as a postseason tournament called the Triple-A Final Stretch in which all 30 Triple-A clubs competed for the highest winning percentage over that stretch. Toledo finished the tournament tied for 13th place with a 5–5 record. In 2022, the Triple-A East became known as the International League, the name historically used by the regional circuit prior to the 2021 reorganization.