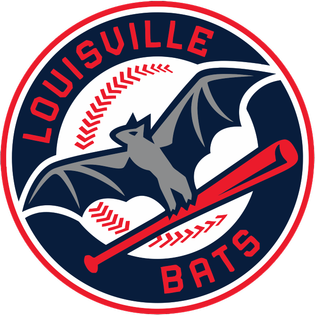 The Louisville Bats are a Minor League Baseball team of the International League (IL) and the Triple-A affiliate of the Cincinnati Reds. They are located in Louisville, Kentucky, and are named in dual reference to the winged mammal and baseball bats, such as those manufactured locally under the Louisville Slugger brand. The team plays their home games at Louisville Slugger Field, which opened in 2000. The Bats previously played at Cardinal Stadium from 1982 to 1999.

The club began play as the Louisville Redbirds in the Triple-A American Association (AA) in 1982. Louisville won three AA championships: in 1984, 1985, and 1995 as the top affiliate of the St. Louis Cardinals. They joined the Triple-A International League in 1998 following the dissolution of the AA after the 1997 season. The Redbirds rebranded as the Louisville RiverBats in 1999; this was shortened to Bats in 2002. In conjunction with Major League Baseball's restructuring of Minor League Baseball in 2021, the Bats were shifted to the Triple-A East, but this was renamed the International League in 2022. Their lone IL championship was won in 2001 with Cincinnati.

In 1982, the St. Louis Cardinals moved their Triple-A team of the American Association (AA), the Springfield Redbirds, from Springfield, Illinois, to Louisville, Kentucky, where they became the Louisville Redbirds. They played their home games at Cardinal Stadium, which was located at the Kentucky Exposition Center and seated over 30,000 people. The stadium previously hosted the Louisville Colonels from 1957 to 1972.

During their inaugural 1982 season, the Redbirds broke the minor league attendance record by drawing 868,418 people to Cardinal Stadium. On the field, the team narrowly missed the playoffs when they finished in second place, just one-and-a-half games out of first at 73–62. In 1983, the Redbirds became the first minor league team to draw over one million fans in a single season (1,052,438). The team improved to league-best 78–57 and won the Eastern Division title, which qualified them for the postseason. Though Louisville won the semifinals versus the Oklahoma City 89ers, 3–2, they lost the AA championship to the Denver Bears, 4–0, in the finals. Manager Jim Fregosi was selected as the AA Manager of the Year. The franchise was awarded the 1983 John H. Johnson President's Award, recognizing them as the "complete baseball franchise—based on franchise stability, contributions to league stability, contributions to baseball in the community, and promotion of the baseball industry."

Fergosi led the Redbirds to win back-to-back American Association championships in 1984 and 1985. The 1984 squad won the semifinals against the Indianapolis Indians, 4–2, before winning their first league title over the Denver Zephyrs, 4–1. Their second came the next season after winning the 1985 Eastern Division title and defeating Oklahoma City, 4–1, in the only round of playoffs. Fergosi won his second Manager of the Year Award for the 1985 campaign.

The 1987 team made a return to the postseason, but they were eliminated by Indianapolis, 3–2, in the semifinals. Outfielder Lance Johnson was honored with both the AA Most Valuable Player (MVP) Award and Rookie of the Year Award. Louisville regularly finished third or fourth in their four-team division over the next six seasons. A pair of Redbirds won league awards, however, during this period. René Arocha was selected as the 1992 Most Valuable Pitcher, and catcher Todd Zeile was the 1989 Rookie of the Year. The team qualified for a playoff spot in 1994, but they were quickly swept out of the semifinals, 3–0, by Indianapolis. The Redbirds came back in 1995 to sweep Indianapolis in the semis before winning a third AA championship versus the Buffalo Bisons, 3–2, behind manager Joe Pettini.

Louisville experienced a number of changes around the turn of the millennium. The American Association, of which the Redbirds had been members since 1982, disbanded after the 1997 season. Its teams were absorbed by the two remaining Triple-A leagues—the International League (IL) and Pacific Coast League (PCL), with Louisville joining the IL. Their 16-year relationship with the St. Louis Cardinals also ended after the 1997 season when the Cardinals chose to move their Triple-A affiliation to the Memphis Redbirds, a PCL expansion team which was located closer to St. Louis. Louisville then became the top farm club of the Milwaukee Brewers in 1998. They started their time in the IL by winning the Western Division title, but in the Governors' Cup playoffs, they were eliminated in the semifinals by the Durham Bulls, 3–0. In 1999, the team rebranded as the Louisville RiverBats. The name was a dual reference to Louisville's location on the Ohio River and baseball bats, such as those manufactured locally under the Louisville Slugger brand. Their new logos incorporated a bat (the animal) swinging a baseball bat. After a second season with the Brewers, Louisville entered into a new affiliation with the Cincinnati Reds in 2000. They also left Cardinal Stadium for the new US$27.8 million Louisville Slugger Field. Located in downtown Louisville, the new ballpark seats 13,131 people with a more intimate setting than their previous facility.

In 2001, manager Dave Miley led the RiverBats to an 84–60 record and the Western Division title. They defeated the Norfolk Tides, 3–2, in the semifinals to advance to the final round against the Scranton/Wilkes-Barre Red Barons. Louisville won the first game of the series, 2–1, before the September 11 terrorist attacks resulted in the cancellation of the rest of the playoffs. The RiverBats were declared the International League champions for 2001.

Louisville dropped "River" from its name to become simply the Louisville Bats in 2002. Outfielder Raúl González won that season's IL MVP Award. The team returned to the playoffs in 2003, with another division title, but they were ousted in the semifinals by Durham, 3–1. In 2007, first baseman Joey Votto was selected for the IL Rookie of the Year Award. The Bats made three consecutive trips to the postseason from 2008 to 2010 with back-to-back-to-back division titles, but they were eliminated by Durham each time in the semifinals. Rick Sweet won the IL Manager of the Year Award in 2008 and 2009, and Justin Lehr won the Most Valuable Pitcher Award in 2009. Typically finishing third or fourth out of four teams in the Western Division, Louisville did not again qualify for the Governors' Cup playoffs after 2010.

Right fielder Aristides Aquino was selected as the 2019 IL Rookie of the Year. The start of the 2020 season was postponed due to the COVID-19 pandemic before being cancelled on June 30.

Following the 2020 season, Major League Baseball assumed control of Minor League Baseball in a move to increase player salaries, modernize facility standards, and reduce travel. The Cincinnati Reds retained Louisville as their Triple-A affiliate, but the International League disbanded, and the Bats followed the other IL teams into the Triple-A East. Louisville ended the season in sixth place in the Midwestern Division with a 51–68 record. No playoffs were held to determine a league champion; instead, the team with the best regular-season record was the declared the winner. However, 10 games that had been postponed from the start of the season were reinserted into the schedule as a postseason tournament called the Triple-A Final Stretch in which all 30 Triple-A clubs competed for the highest winning percentage over that stretch. Louisville finished the tournament tied for 18th place with a 4–5 record. In 2022, the Triple-A East became known as the International League, the name historically used by the regional circuit prior to the 2021 reorganization.